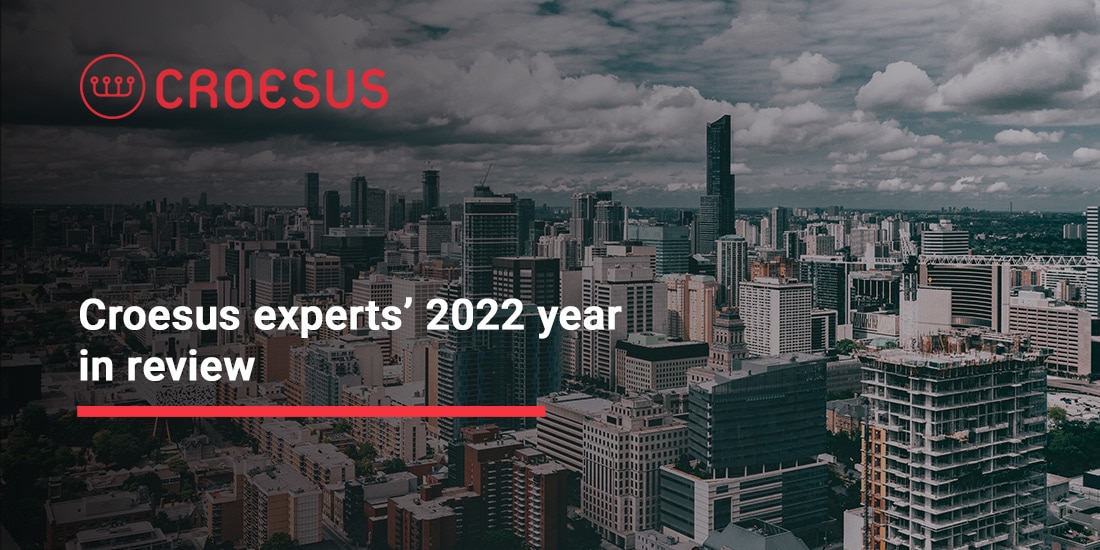 Posted at 08:55h in Industry insights by JF

2022 was a year full of twists and turns in the financial and FinTech community. Croesus experts look back and analyze some of the year’s events.

The year began with the release of a Statistics Canada report showing an overall decline in cyber security incidents in 2021. By comparison, 21% of businesses reported an incident in 2019, compared to 18% in 2021. This decrease corresponds to an uptick in concrete actions taken by businesses to protect themselves from potential cyber threats. Indeed, the amount spent by Canadian businesses to prevent cyber security incidents increased by $2.8 billion in 2021.

“This report demonstrates that the investments made in recent years in cyber security incident detection and prevention are paying off, reducing the risks related to ransomware and personal data theft,” said Jonathan Gagnon, Vice-President of Software Engineering at Croesus.

“The increased spending on disaster recovery, however, suggests that cybercriminals are using increasingly sophisticated techniques, which makes investments in prevention even more important,” said the financial technology expert.

Also noteworthy is that the average amount to restore operations increased by $200 million between 2019 and 2021, while the proportion of businesses with cyber security measures remained the same.

Another important development at the beginning of the year was the memorandum of understanding between the Investment Industry Regulatory Organization of Canada (IIROC) and the Montréal Exchange regarding cross-market surveillance. Mandated by the Canadian Securities Administrators (CSA), the memorandum is aimed at providing effective oversight to prevent questionable market practices.

“This is great news for Canadian investors and market participants such as brokerage firms,” said Annie Sinigagliese, Vice-President and Chief Product Officer at Croesus. The former Managing Director of Government Relations for the Investment Industry Association of Canada (IIAC) is no stranger to this initiative, having overseen it.

“Previously, regulatory oversight was done separately by the Regulatory Division of the Montréal Exchange and IIROC. Separate oversight by product type is not optimal, since manipulation on financial markets can be done by placing orders on derivatives and their underlying products,” explained the compliance expert.

This agreement will give regulators a comprehensive view of trading on Canadian markets and will improve their ability to detect market manipulation and other non-compliant transactions.

The federal government mandated a group led by Abraham Tachjian to establish an open banking system aimed to give Canadians and businesses greater control over their financial data and be better equipped to manage their finances. Despite some governance concerns, the project is pushing forward with an expected release date of early 2023.

This banking system has been anticipated for several years by many players in the financial services industry, according to Matthieu Cardinal, Vice President of Business Development and Strategic Partnerships at Croesus.

“The federal government has an important role to play in establishing the legislative framework needed to implement an open banking system in Canada,” said Cardinal. “To do so, it will have to take into account the industry’s point of view, which should be included in Mr. Tachjian’s report. The protection of investors and consumers of financial services must be equitable in achieving the goal of democratizing access to financial services by sharing the financial data that consumers have consented to.”

Cardinal argues that the success of such a system in Canada lies in standardizing the exchange of financial information through the use of API protocols (APIs) and developing a clear framework of legal responsibilities.

The Canadian Investment Funds Standards Committee (CIFSC) announced that they are working on a new framework for categorizing environmental, social and governance (ESG) funds. The organization proposed six new categories for ESG funds, allowing for the standardization of the terminology for investors. The classification system will help investors more seamlessly compare the performance of different funds within the same overall category or even between categories.

“This is good news. It shows that Canadian and international regulators are working together to put in place more rigorous and transparent ESG norms and standards to prevent greenwashing, among other things,” said Annie Sinigagliese, Vice-President and Chief Product Officer at Croesus.

Statistics Canada reports that the unemployment rate fell to a record low of 4.9% while labour shortages continued to plague Canadian businesses. This pushed up wages and added pressure to inflation. In 2022, Canadian inflation reached 8.1%, a level not seen in over 40 years. To mitigate inflation, the Bank of Canada raised its benchmark rate by 4% over 10 months, from 0.25% in March 2022 to 4.25% in December 2022.

“This increase in the key rate is barely bringing down inflation, but since November 2022, we have seen that inflation is in a downward trend,” said Luc Larose, Vice-president of Client Experience at Croesus. He noted that several factors behind the phenomenon are ongoing, such as the war in Ukraine, which is influencing the price of energy, certain fertilizers and agricultural commodities, the Covid control policy in China, which disrupted global supply chains, and the labour shortage.

“The war on inflation will continue to be a challenge in 2023 and signs of an economic slowdown in 2023 and 2024 will be something to watch for. As a result, wealth management professionals will have adjustments to make to their clients’ portfolios, especially those of baby boomers, who are seeing the value of their portfolios exposed to risk,” he said.

The Bank of Canada increased the key interest rate by 100 base points, reaching a 39-year high of 2.50%. This sharp rise exceeded most economists’ predictions. This was intended to counter historically high inflation rates, which the bank estimated would stay in the ballpark of 8% through the following months.

“For the wealth management industry, this is both good and bad news,” said Luc Larose, Vice President of Client Experience at Croesus.

“Such a sharp rise will significantly increase the cost of borrowing for businesses, curb their investments and reduce their ability to achieve target earnings and maintain their profit margins. This will probably put pressure on stock values, which will trade lower, and investors will most likely have less money to invest,” he said.

“However, it is also good news in that the bond market may be bullish and become a safe haven for investors with liquidity. One thing is certain, central banks are determined to tackle inflation,” he said.

Apple Pay was reported to have overtaken Mastercard in transaction processing with $6 trillion in total transactions to Mastercard’s $4.8 trillion. While still behind Visa, Apple Pay’s performance demonstrates its increase in popularity, due in part to its monopoly of NFC system in iPhones.

“So it’s not surprising to see a technology company become one of the largest payment processors in the world,” noted Matthieu Cardinal, Vice-President of Business Development and Strategic Partnerships at Croesus.

The FinTech business development expert, however, said he is amazed at how quickly ApplePay (launched in 2013) has caught up with Mastercard (launched in 1966). “We can expect this trend to grow,” he added.

The Ontario Securities Commission (OSC) CEO Grant Vingoe announced that the organization was planning to increase its surveillance of the crypto-assets market, the goal being to protect investors and offer a more level playing field in a largely unregulated segment. The OSC reports that nearly 30% of Canadians plan to buy crypto in the next year, motivating the organization’s move to better regulate the market.

“Oversight of platforms that trade cryptocurrencies and crypto-assets was quickly established by Canadian regulators when cryptocurrencies and crypto-assets first emerged,” said Annie Sinigagliese, Vice-President and Chief Product Officer at Croesus. “However, more needs to be done to better regulate the platforms, the various products and to educate consumers on the risks associated with them.”

While most Canadians are financially literate, significant efforts are still needed to fill some salient gaps in their knowledge, showed a PC Financial study. Indeed, nearly 80% consider themselves confident in their financial abilities, but younger Canadians are much less optimistic about applying their knowledge to save for the future. These gaps suggest there is a pressing need for financial products that teach people how to manage their finances.

“These results show that wealth managers are still relevant, despite market pressures to encourage investors to use robo-investment systems,” said Luc Larose, Vice-President of Client Experience at Croesus. As such, the technology tools that help these professionals do their work remain relevant.”

November: The morass of cryptocurrency

One of the year’s biggest upsets involved the demise of FTX, one of the most important cryptocurrency exchange platforms. Following the resignation of its founder and CEO, Sam Bankman-Fried, after an investigation by the US Securities and Exchange Commission, the platform filed for bankruptcy protection. This event sent significant ripples through the crypto market, causing Bitcoin to drop by 5.8%, its lowest point since 2020, and Ethereum by 5%, in just one week.

“After the Quadriga CX bankruptcy, the FTX debacle came as no surprise to experts,” noted Annie Sinigagliese, Vice-President and Chief Product Officer at Croesus. “Despite the efforts of regulators to fully understand these new products, to supervise them and to supervise the platforms that trade them, it is clear that the regulatory oversight of ‘standard’ investment products (stocks, bonds, derivatives) is much stricter and more rigorous than the oversight of digital assets.”

While she predicts history will repeat itself, as a former holder of the Crypto Currency Certification Consortium’s Certified Bitcoin Professional (CBP) designation, she argues that “the multiple accusations against Bankman-Fried send a clear message that fraudsters can no longer sleep soundly.”

The merger of the Mutual Fund Dealer’s Association (MFDA) and the Investment Regulatory Organization of Canada (IIROC) is now official. Last year, members voted to agglomerate both organizations into a new Single Regulatory Organization (SRO), which was approved by the Canadian Securities Administration (CSA). Although the merger is official as of January 1st, there will be a gradual transition over many months and years.

“This will be good for investors. Consolidating the rulebooks of these two organizations will simplify the work of financial institutions in complying with the rules and regulations,” said Annie Sinigagliese, Vice-President and Chief Product Officer at Croesus.

The compliance expert also welcomes the appointment of former IIROC CEO Andrew Kriegler to head the new self-regulatory organization. She feels this announcement will ensure a smooth transition for financial institutions and ultimately investors.

The year at Croesus

Croesus was recognized as one of the 20 Most Promising Canada Tech Companies in 2022 by CIOReview. Our offering of application interfaces (APIs) and widgets that bridge the gap between Croesus solutions and numerous systems caught the jury’s attention.

Croesus holds its position as a member of the Canada’s Best Managed Companies Platinum Club.

Croesus receives SOC 2 certification, which ensures compliance of its internal control processes for the protection of its data and those of its partners and clients.

The year ended on a high note with two outstanding awards for two of our female stars.

Annie Sinigagliese, Vice-President and Chief Product Officer at Croesus, was named a 2022 5-Star Leading Woman in Wealth by Wealth Professional magazine. This award spotlights forward-thinking, influential women who are making an impact on the Canadian financial industry.

And Marie-Philippe Gill, a researcher and developer at Croesus, won a Globant Award in the Techfluencer Canada and United States category. The Girl Knows Tech editor is the first Canadian to win this honor.

Top 5 most read blogs of 2022
Back to Industry insights

Experience it yourself, see the difference
Request a demo